As parents, we are responsible for making sure our children get proper nutrition, plenty of exercises, a good education, and so on. We read articles and books on all sorts of difficult parenting topics, including the modern problem of managing screen time.  However, managing kid’s screen time is easier said than done.

Some of these resources give us a glimpse into how the experts handle screen time with their own children. It can be a very tricky balancing act!

Kid’s Screen Time Debate : Is it ok to spend all waking hours on educational apps?

Of course, I was ecstatic he wanted to learn Spanish. We are already a bilingual Franco-American family, speaking mostly French at home, and for a month or so, we were all “playing” Spanish on our iPhones and iPads.

But I also worried about the amount of my kid’s screen time. The last thing I want is to leave him alone with his electronic devices.

My son is six years old. He’s smart and curious and very passionate about whatever his interest of the month happens to be at any given moment.

Not long ago it was Spanish. (He’s moved on the Marvel superheroes now.)

He even confessed to me before bed one night that he had a hard time falling asleep because he was thinking about Spanish.

Fab, my husband, had been reading Harry Potter with him before bed and said he wasn’t even listening to the story because he was constantly interrupting with “papa, did you know…?” phrases about Spanish!

Check out the printables below to help your child deal with any anxiety they may be facing in their daily life or at school.

I wish I could say I recognized myself not at all in this story, but he definitely followed in my footsteps on this one.

My brain is constantly spinning about something, particularly when I am really into one big thing.

Like I said, it feels silly to complain about your kid is so eager to learn.

But at the same time, if we let him follow his heart to its obsessive conclusion, he would have spent every waking moment on the iPad making us help him with his Spanish lessons.

Surely playing an educational game is better than games purely for entertainment, though, right? Or is it?

That was just the first of our questions as we settled into this new phase in our son’s development. Also, how we are getting adjusted to our kid’s screen time.

Here are some kid’s screen time questions we would like answers for:

When a child has the lofty goal of learning a language, do the same screen time limits apply?

Did we discourage his love of learning by refusing to let him spend his entire weekend learning Spanish on a tablet?

I did some reading, some thinking, and some discussing with a few people, including Fab.

Our son had a five-month-old sister he was still adjusting to at the time, remarkably well for the most part, but a new sibling IS an adjustment.

He had become SO excited and wild at times that we really didn’t know what to do with him or how to handle him.

As a result of having a new baby in the house, our kid’s screen time has definitely been a lot more than usual.

But did the extravagant behavior stem from the new sister, the added screen time, or both?

Or maybe it was simply because he was almost six and he was tired of controlling himself all day at school, as one friend suggested, so he’s fresh out of self-control when he gets home?

We’ve been looking high and low for solutions. Ones that work! 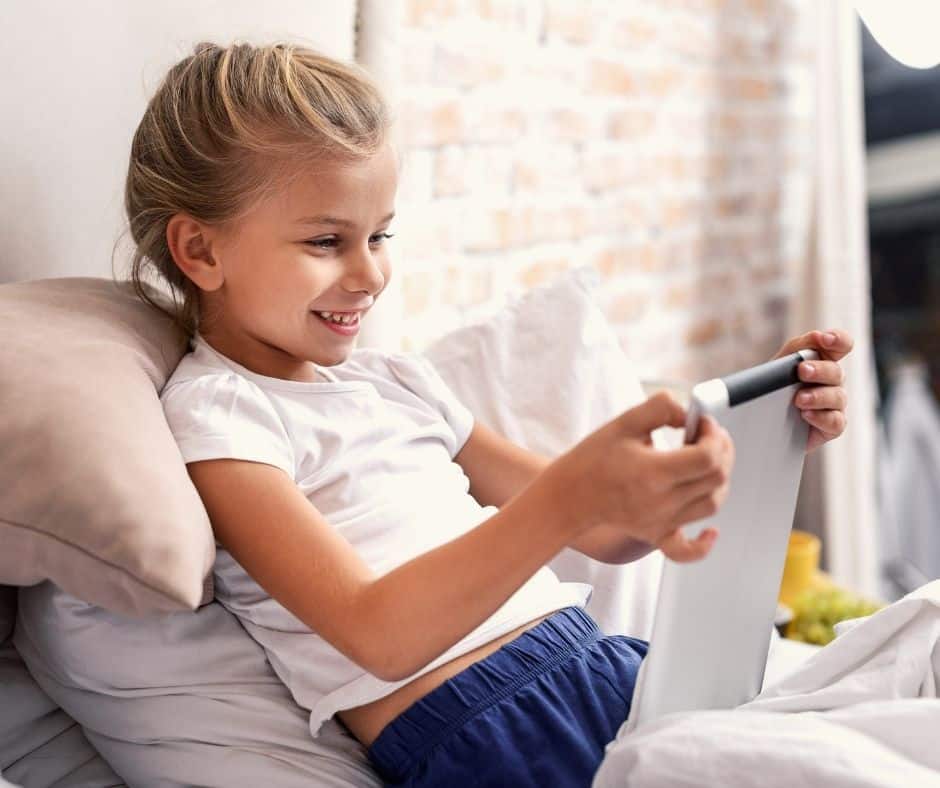 Here’s what I found about kid’s screen time:

Tech giants like Steve Jobs and Bill Gates famously take all our money and help get us addicted to screens.

But keep their own kids away from them while they are young. That definitely seems to make a statement.

However, experts in fields from pediatrics to sleep research to anti-violencewho are also parents, do not necessarily recommend a zero-tolerance to technology approach.

Let’s be real — sometimes we really need those screens to help get through the day!

This article from the NY Times talks about how more and more tech people are sounding the alarm bells about how the negative effects of excessive sreen time kids’ get.

“We thought we could control it,” Mr. Anderson said. “And this is beyond our power to control.

This is going straight to the pleasure centers of the developing brain. This is beyond our capacity as regular parents to understand.” New York Times, Oct. 26, 2018

To the author’s credit, a skeptic is also interviewed and casts doubt on the alarmist views of some of the stricter tech parents.

It’s true that we don’t know enough about the effects of screen time on children.

All the fast developing technology that runs our lives now, but it’s also true that if you go back a couple of centuries, many people were concerned about the effects of novels on young people, especially women.

Now, we’re all desperate for our kids to enjoy reading novels, or just about anything really!

Times change and so do our habits. Change isn’t necessarily bad, just scary.